Langley's Soup Box Derby was this past weekend, and after a few years of intending to participate, we finally got in gear and built our racer.

After scoring a couple of old (free!) BMX bikes to use as the base, an idea took shape. Michaleen and I spent Friday afternoon and evening putting the contraption together, and, after an ill-fated attempt at some rear-wheel steering, had a complete (albeit untested) racer done at 10pm. With darkness upon us, we had to cancel any plans for a test run and just hope for the best at the race in the morning. 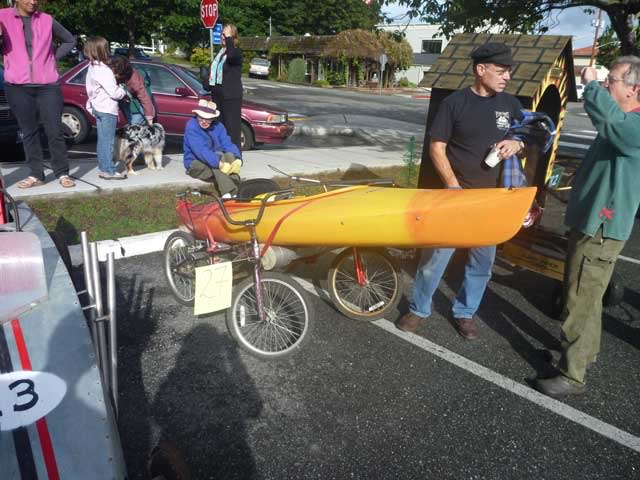 Here it is in all of its glory: two bikes hooked together with some metal bits with a kayak strapped on top - the pinnacle of simplicity and elegance! 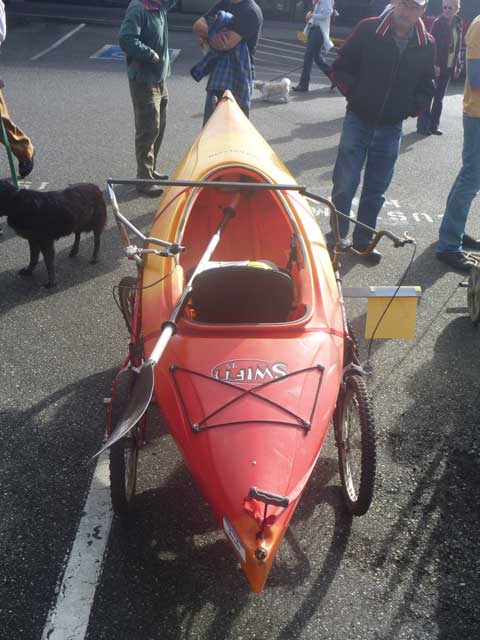 Michaleen suggested that if everything went horribly wrong and I couldnt stop the contraption, I could veer left and into Puget Sound, so we dediced the paddle was a necessity. 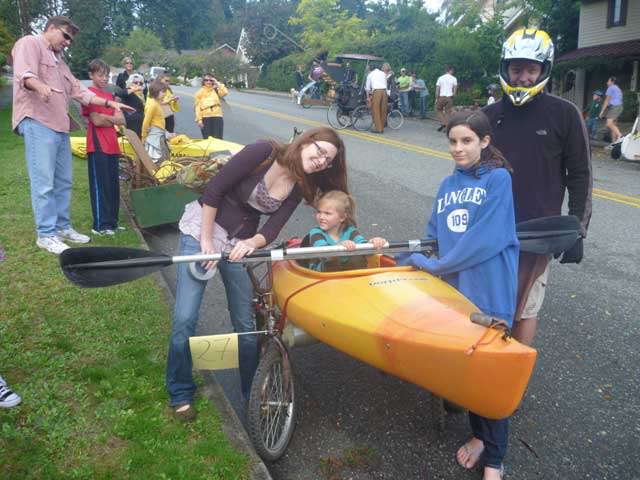 Here is me with 3/4ths of the pit crew preparing for the first run. 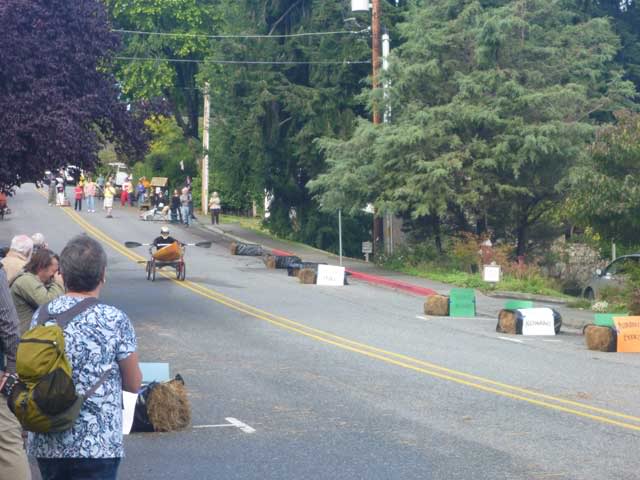 Each racer had to take a mandatory solo test run to make sure their machine was capable. Since we have never tested out our contraption, I have to admit I was a bit nervous. After about 10 yards, I picked up some steam and suddenly had quite a bit of shaking and wobbling to contend with. I managed to keep the racer inbetween the curbs, but something was definitely wrong. 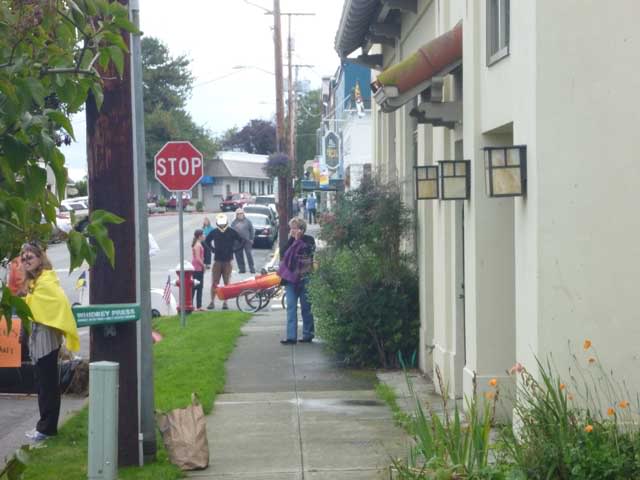 After the test run, we decided that the shaking and jerking was due to too much toe-out and some loose handlebar bolts. We neglected to bring any tools, but after a quick trip to the second-hand store, we had a make-shift tool make out of a socket bit (no ratchet) and decided that our problems were solved and we were going to go for it. Here is Eden giving me some advice on how to improve my driving for the official runs. 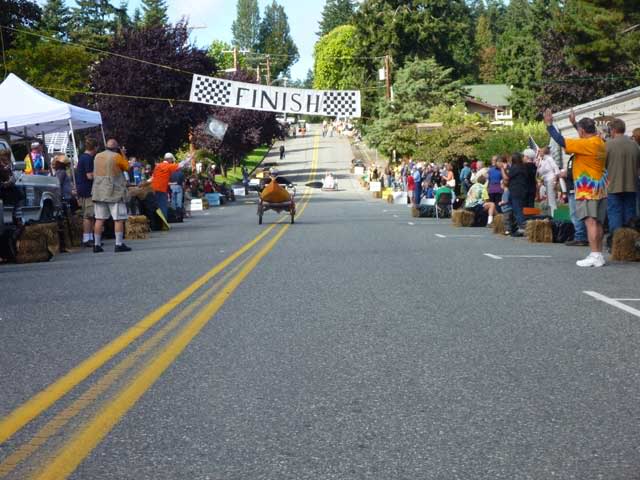 We headed back up the hill and the official came over and offered some cautionary words. He was worried about the shaking and swerving, but I assured him we were sorted. Even the little kids were making the run from the top of the hill so we couldnt wimp out now. In the first heat, I started of cautiously with the brakes slightly on just in case. As my competitior pulled ahead, I decided to just go for it. Miraculously, the shakes were gone and I navigated straight and true to the finish a few yards behind. 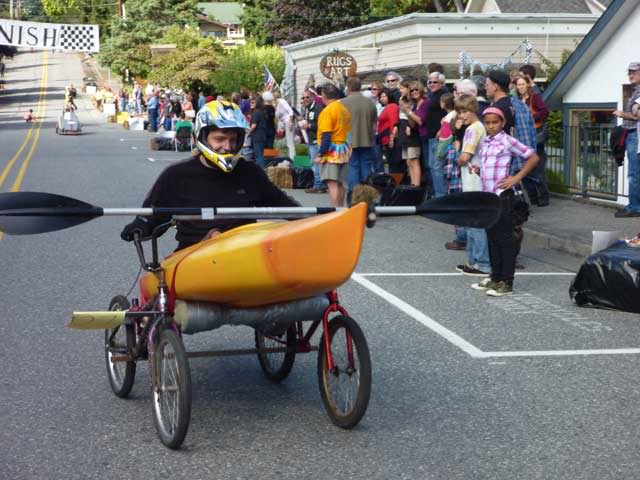 In the second heat, I was feeling more confident and went for it as soon as the flag dropped. Our well-tuned machine pulled away from the competition and cruised to victory. 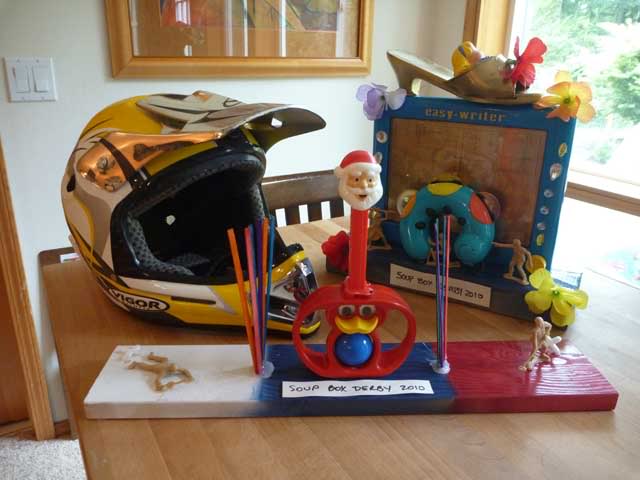 In the end, we werent the fastest racer, but we werent even close to the slowest, so I was happy. For our outstanding effort, we 'earned' these trophies. Actually, everybody who entered and even some people who didnt enter got a trophy. In the end, it was a really fun day and we are already dreaming up ideas for next years vehicle.