June 5th-8th I headed to Mt. Rainier to attempt a summit climb. Although it is a two day climb, it is really more like one really long day. On the first day, you hike about 4-5 miles from Paradise up to Camp Muir (@ 10,000 ft) and then that same night around midnight, you head out on the summit portion (another few miles and another 4,000 ft up).

The weather at Paradise when we left on Sunday morning was lousy, kind of misty and rainy and foggy, but at least it wasnt very cold. 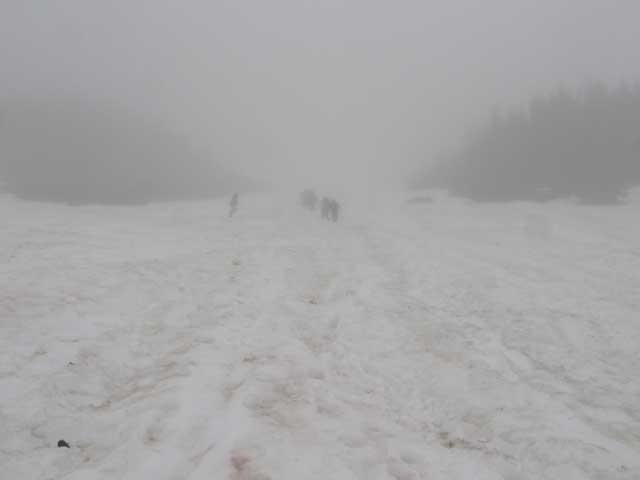 We hiked about an hour at a time, and then took 10-15 minute breaks inbetween. Here is the rest of my team taking a break about halfway up. From this point on, we got above the cloud cover and it was super sunny and hot. A few smart guys were hiking in short and t-shirts and that turned out to be the best idea of all. 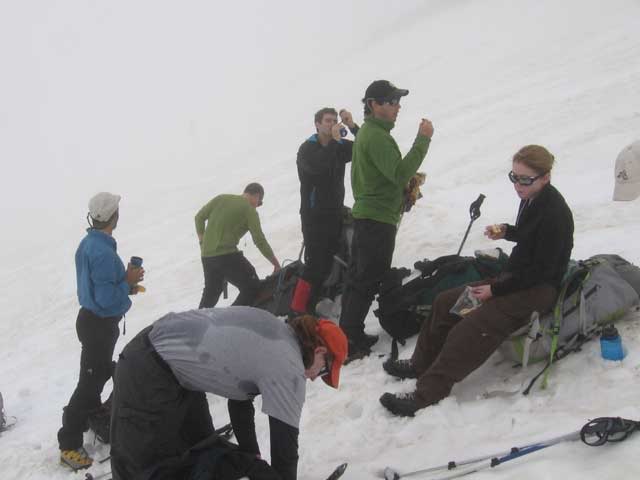 Here are a couple of shots looking across and up the mountain. You can see the huge crevasses that are opening up as the summer wears on. 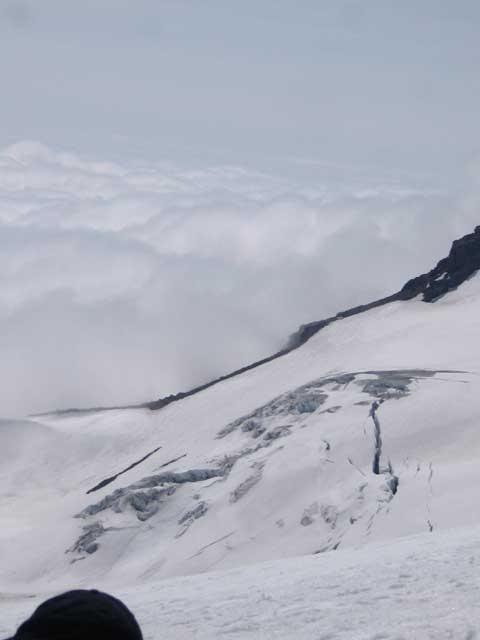 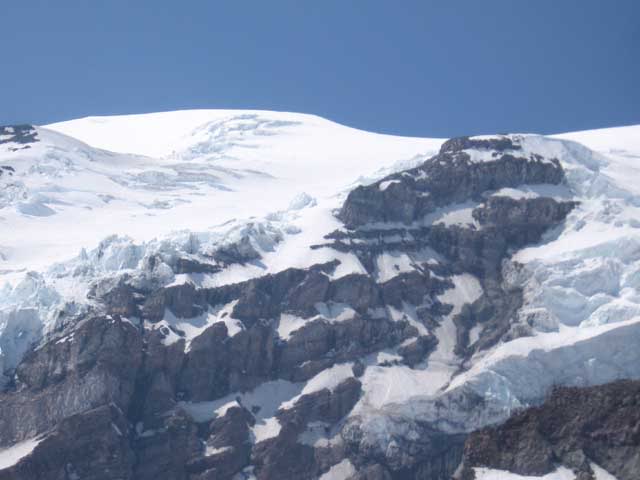 Only a few other peaks were tall enough to poke up above the cloud cover. 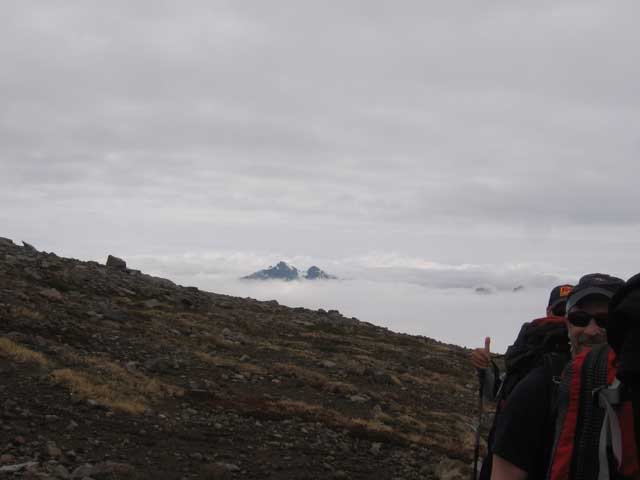 Is that where we are headed? 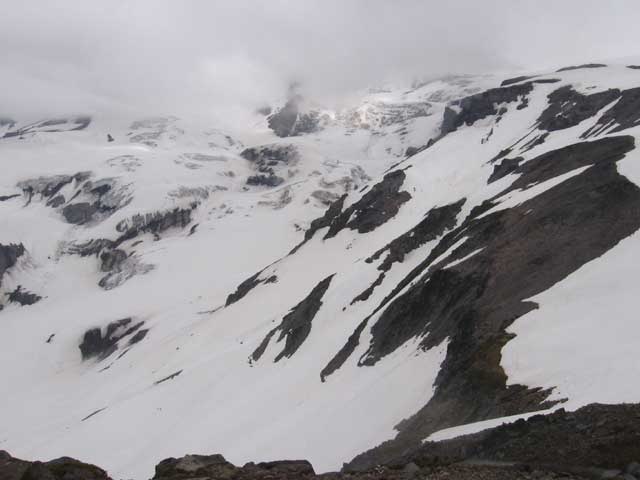 We arrived at Camp Muir around 4 in the afternoon and a lots of other teams and people were already there, hanging out and waiting for their summit attempts. 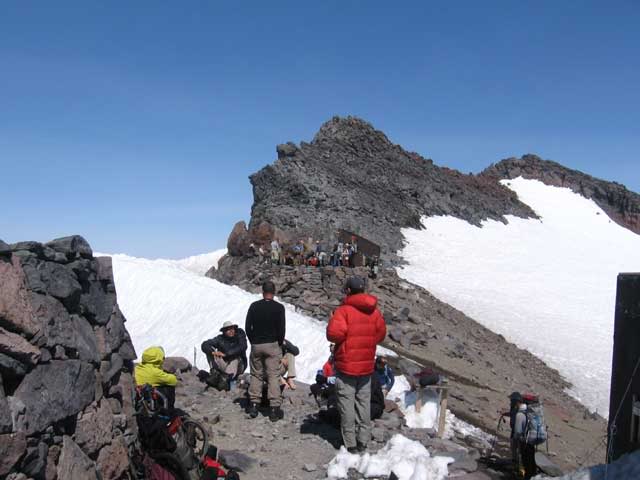 After a sleepless few hours, we all assembled around midnight to head out on the summit push. It was snowing lightly and I was actually excited to get going. 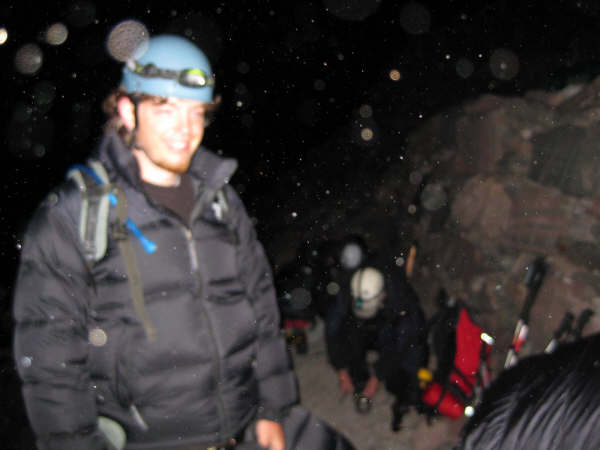 I didnt get any more good pictures past Camp Muir because 1) most of the summit climb was in the dark, 2) once you are climbing, there is very little stopping and no chance to take pictures while you climb, 3) when we finally did reach the summit, my camera was frozen (along with our water, sunscreen, and pretty much everything else). One of the other climbers said that their dad had climbed the mountain about 30 years prior and had a celebratory Rainier beer at the summit, so they had packed a few bottles along as well and we enjoyed the world's coldest beer on top of the world. 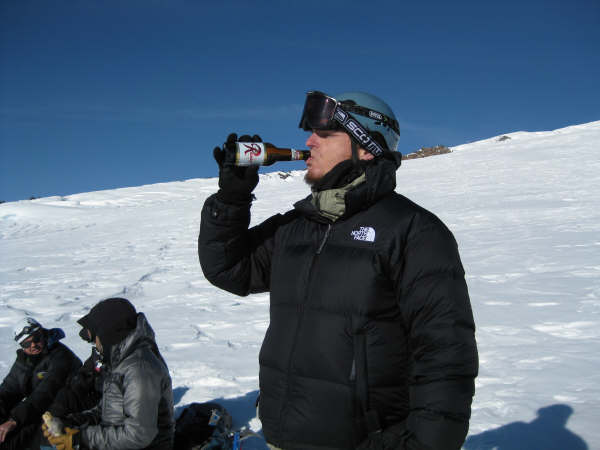 The trek down was pretty exciting too since we finally got to see the crevasses and icefalls that we had been threading around in the dark on the way up. (Jumping over a two-foot wide bottomless crevasse seems somewhat more palatable when you cant see anything but the headlamp-illuminated snow directly in front of you). Highly recommended!

Evolution of a Tree House - Part 1

Making a super functional improvement for our new boat