A couple of weeks ago, Michaleen was going to Wisconsin for a family get-together and Eden was down in Phoenix, so I had a week to kill. I decided to head up to Whistler to do some mountain biking. Since I was going to be there for almost a week, I wanted to try to get in some other activities as well. After dropping Michaleen off for the airport, I headed north to Canada. 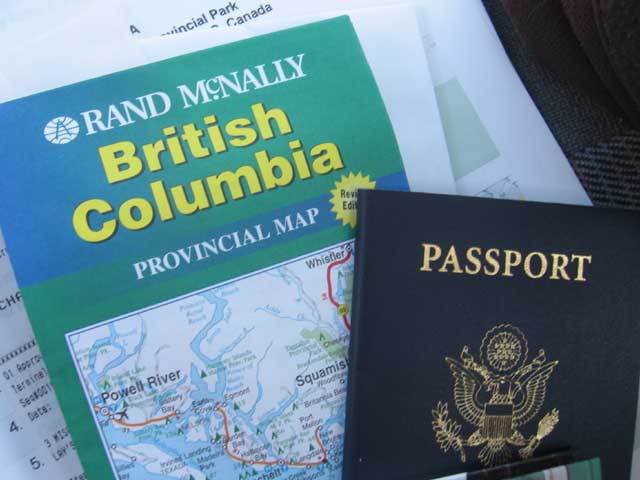 After a little trouble getting across the border (apparently not having any hotel reservations or knowing anyone in Canada made me seem suspicious), it was a nice drive up through Vancouver and along the Sea-to-Sky highway. They are doing a ton of road construction to prepare for the 2010 Olympics, but it went smoothly and I didnt get held up at all.

I had a list of three or four potential campsites near Whistler, and the first one I decided to try was the Cal-Cheak Provincial Park. It was almost deserted and I practically had the whole place to myself. I pitched camp and took a short hike around the area to check things out. There was a river running along the edge of the campsite with a cool suspension bridge that was real close to the water. 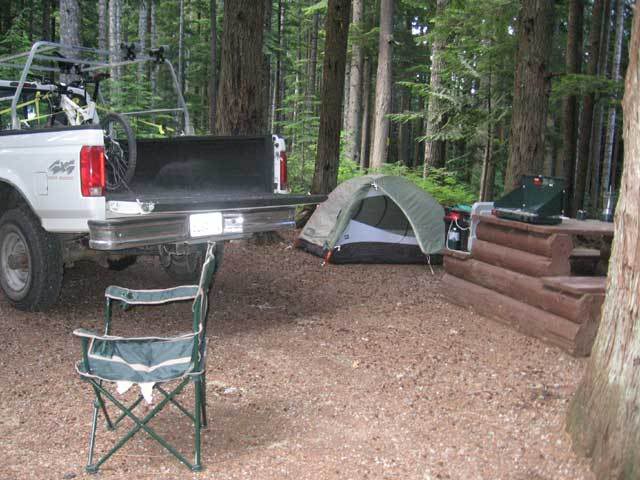 On Wednesday morning, I woke up early and had a breakfast of scrambled eggs, mushrooms, and jalapenos, all rolled up in a tortilla. I set out for Whistler, which was only about 10 kilometers away. Today I was going rafting, so I met up with the outfitters and we hopped on the old school bus for the drive to the put-in. We were rafting the Elaho river down to Squamish. Shortly after we put in, we came to a spot where we could do some cliff jumping. The water was super cold (about 40 degrees) and you could see the waterfalls coming off of the glacier, carrying the melted snow and dumping right into the river. But, it sounded like fun anyway, so I took the plunge. 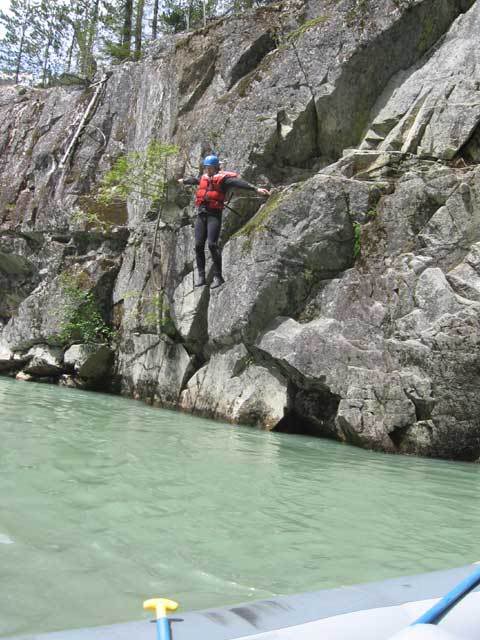 In what would become a common theme for this trip, I didnt get too many other photos because we were in the thick of the action most of the time. I did borrow one photo from the website of the place that was doing photography, and I got one picture of some of the scenery while we had a short lunch break. 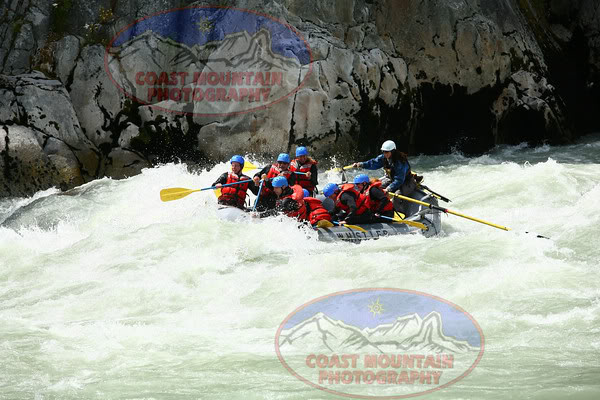 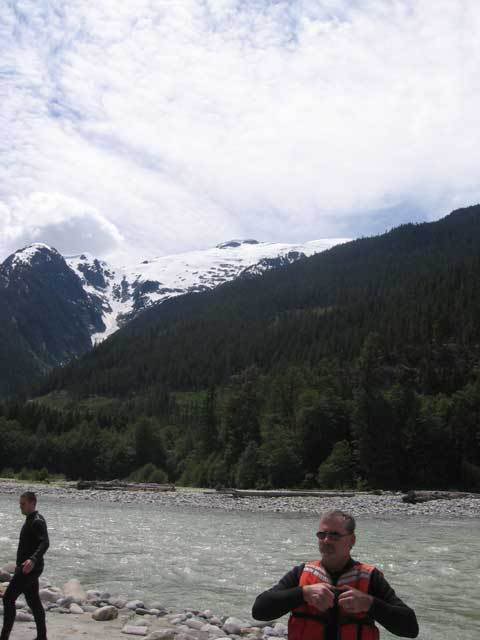 Although it wasnt the longest trip, it was fun and I really enjoyed seeing the area from the river's perspecitve. I headed back to my camp and had some beef filet grilled up on my Coleman stove.

Thursday morning I didnt get up quite so early, so my breakfast consisted of two granola bars instead. Today I was doing the ziplines with a company called ZipTrek. They have two 'courses', the Bear and the Eagle, so I decided to do them both. 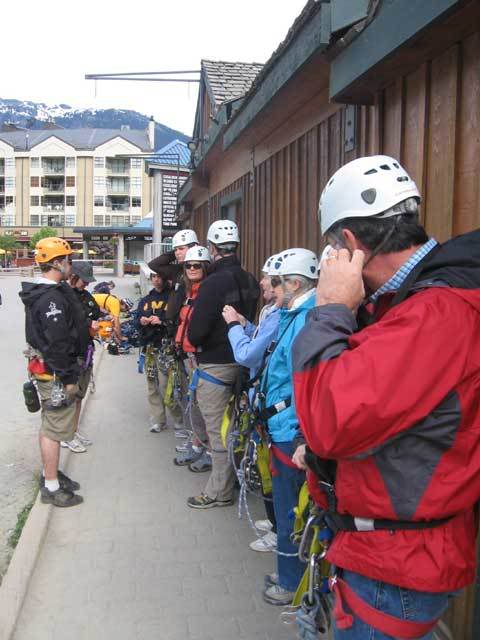 Here we are, in all of our tourist glory, getting all roped up 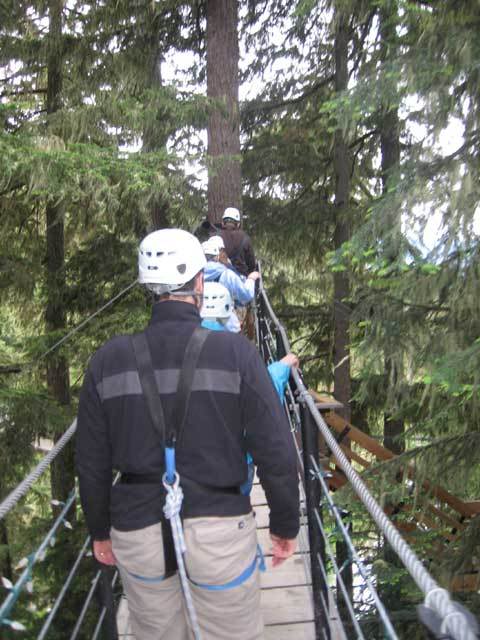 The ziplines are up on Whistler mountain and cross back and forth over Fitzsimmons creek. There is an intricate maze of wooden platforms and walkways that zigzag through the old-growth trees. 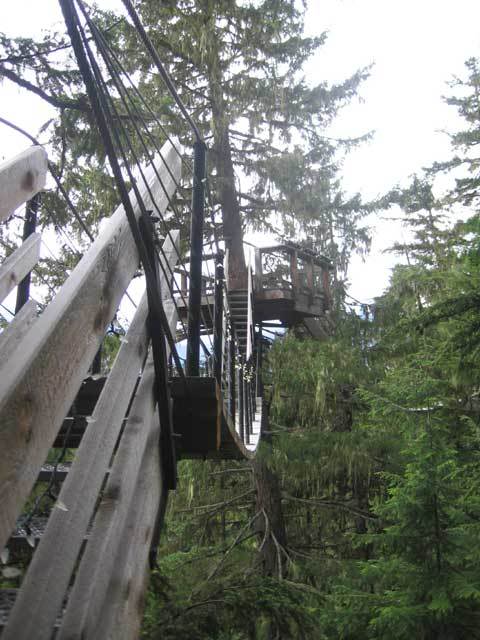 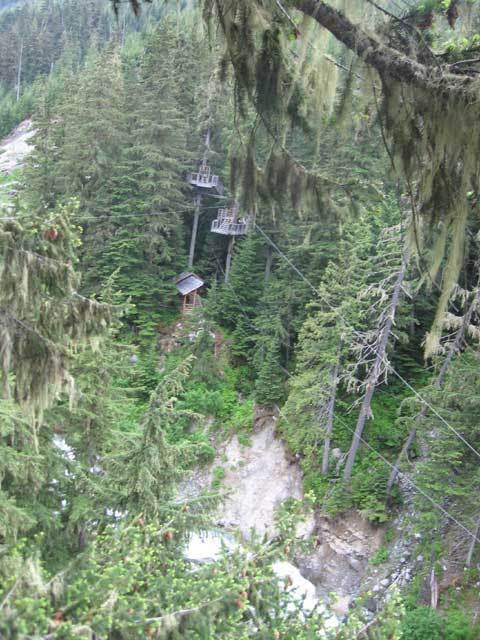 It was a really fun experience, and it was fun to see how different people reacted. Some people were definitely freaked out and one lady even asked if she could back out after we got up to the first big zip line (although she did end up sticking it out and finishing the course). There were lots of screams and death-grips on the harness, but I thought it was really fun and relaxing to whiz through the air. 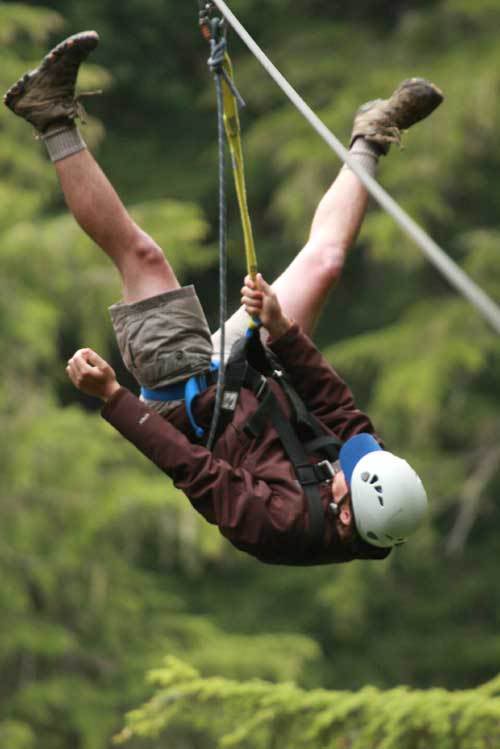 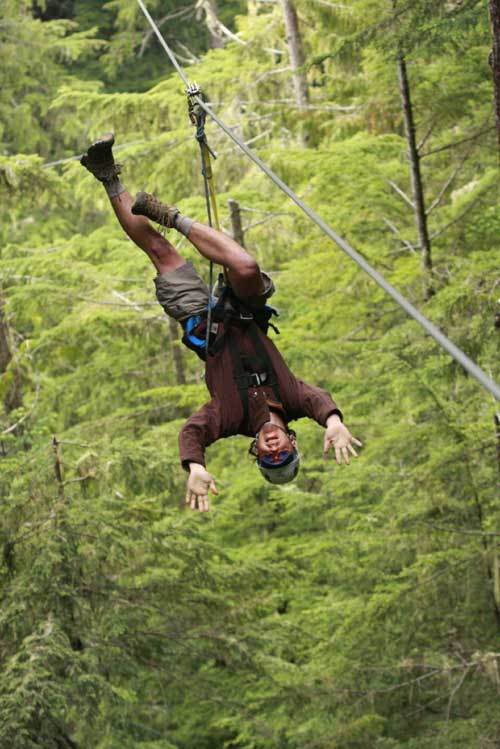 In between the two courses, I had lunch at the Garibaldi Lift Company, which sits right next to the lower portion of the bike park. It was fun to watch the bikers come down off the mountain and get pumped up for the biking I would be doing the next few days.

Originally I planned to do some alpine hiking on Friday, but the Whistler gondola was not opening up for the season until the next day. There were a lot of options since Whistler in the summer is like an outdoor-adventure mecca, but I really came to ride so I decided to get in an extra day. It was nice to be able to ride the lifts up and bomb all the way back down with barely a pedal stroke. I hadnt ridden my downhill bike in quite awhile, so it was fun to get back in the groove and get more comfortable on it again.

One of the neat things about Whistler is that there are bears everywhere, and they are totally indifferent to people. From the lift, I would see bears on almost every other ride up. Usually they were just eating some grass and minding their own business. On one run down, we came around the corner for a stop and there were two bear cubs about 20 feet off the trail, playing on a log and totally ignoring us. 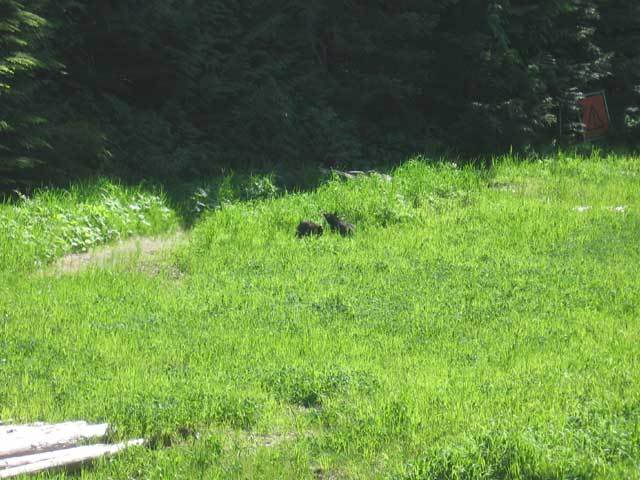 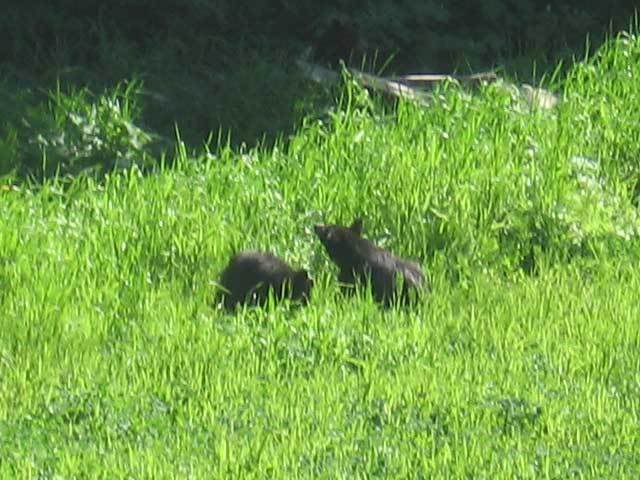 We never did see mama bear, but since we were sure she was not far away, we moved on and left the little bears to play.

Saturday and Sunday were filled with more biking. I had signed up for the Richie Schley Freeride Camp, so I got to ride with some professional mountain bikers including Schley and Wade Simmons. We practiced cornering and jumping and drops, but mostly just rode tons of trails - some of which I wouldnt have dreamed I would have ridden normally. It was an incredible experience - the weather was awesome, the trails were perfect, and it was the best riding I had ever done. Unfortunately, there was so much riding that it didnt leave any time for picture-taking. All I got was a shot of the lower bike park and the sign up at the start of A-Line (probably the signature trail at Whistler). 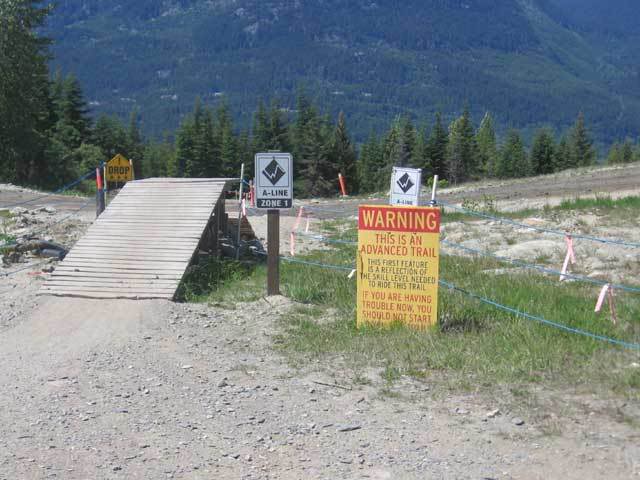 Sunday night, I broke camp and headed home. This time the border crossing was a breeze - took about 15 seconds total. The trip was great and even with the rafting and ziplining and biking, I felt like there was so much more to do and i cant wait to go back!